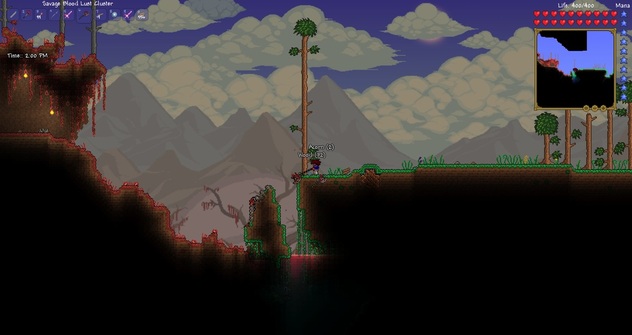 Terraria is a platform game, at first glance it's like Minecraft. But once you've played it a bit you realize that, whereas Minecraft revolves around mining and building, Terraria is much more in-depth. Mining plays a big part, admittedly, but you get chests with some nice loot, and various different layers -more on that later. You get different enemies in different biomes, and there are certain structures that you can find, on the surface and under it.

There are lots of different ores, Copper, Iron, Silver, Platinum, to name but a few. You also get gems, Amethyst, Rubies, Sapphires, Emeralds, even Diamonds! There are many different materials underground, of course there is dirt and stone, but you also get silt, clay, mud, and lots of other stuff.

Also underground you get little wooden 'houses' with a chest, which contains money, potions, and other stuff. also, you often get statues in these cabins. There are two -in my opinion- special ones, the slime statue, and the bunny statue. They, when you power them, spawn bunnies and slimes respectively, thus making it easier to get the 'slime staff', something which I really  want.

Yep, Hell. If you get a shadow key you can open the chests you get in there, getting about is difficult, because of all the lava. If, however, you actually get down that far you should have good enough armor, a grappling hook, and maybe some rocket boots. Or, even better, a jetpack.

Once you got good armor, good weapons, and good tools (namely a  fast pickaxe), you can do The Dungeon. by the way, the The Dungeon isn't a layer, and can ONLY be entered after you've defeated Skeletron, who is apparently the hardest non-hardmode boss of the game. The Dungeon on my world is pink - observe:
Biomes
There are quite a few biomes, the spawn point is always in the forest biome, and there is also the Snow biome, where you get eskimo zombies (from whom you can get the raincoat and rain hat cosmetic items).
Then there is the desert, where during the day you get Antlions and Vultures.
Then you get the Crimson/Corruption where you get the same nasties during day and night, though there are more at night.
There is also the jungle, which has lots of really nasty creatures.
Up in the sky there are floating islands, with sky cabins, inside which you get some 'normal' loot, and also either a "Lucky Horseshoe" a "Red Balloon" or a"Starfury" My favorite is the Starfury. Unfortunately you get Harpies up there too, which can get quite annoying.
At each end of your world there is the beach and the ocean.


Traders and housing
You get lots of traders, they arrive when you build suitable housing for them. To find out if your housing is suitable, go to where you put your armor, and cosmetics, and above that, next to where the Swords are you should see a house. Click on that and you will see all the armor and cosmetic slots disappear and there will be a question mark, click that, and then click inside your house and you will get a message, telling you if your house is suitable or not.

Most traders sell you stuff, the exceptions are - Nurse, who heals you for money. The Goblin tinkerer, who sells you things and can also reforge items for a buff, or a debuff. The Guide, who gives advice, and crafting tips.

Bosses
There are many many different bosses, possibly the first to encounter/summon is Cthulu's Eye, Which a first looks like an eye, and then after a bit and eye with teeth (a bit hard to describe, that). There is also Cthulu's Brain, which you get in the Crimson, after smashing 3 Crimson hearts. Then there is Skeletron, who is the hardest non-hardmode boss. Of course there are lots of others, but those are the ones I have helped kill.
The easiest boss is King Slime. He is, in fact, so easy that some people don't actually consider it a proper boss - just a mini-boss.

You, Weapons, armor and cosmetics
You can have lots of different looks, and there is a Trader who can change your appearance.
Cosmetics are completely useless, they just look fun.
Armor can be put in the cosmetic slot, but looses it's armor rating, and everything else useful. There are lots of different armor sets, some with bonuses when you equip all of it.
There are many weapons, and many different sorts of weapons, there are Boomerangs, Bows, Guns, Knives, Swords, and probably other things that I forgot.
I have accidentally found a bug/glitch where an enormous pit appears, if you have an umbrella/grapple/wings you can fall down it and go through all the layers, right down to Hell. 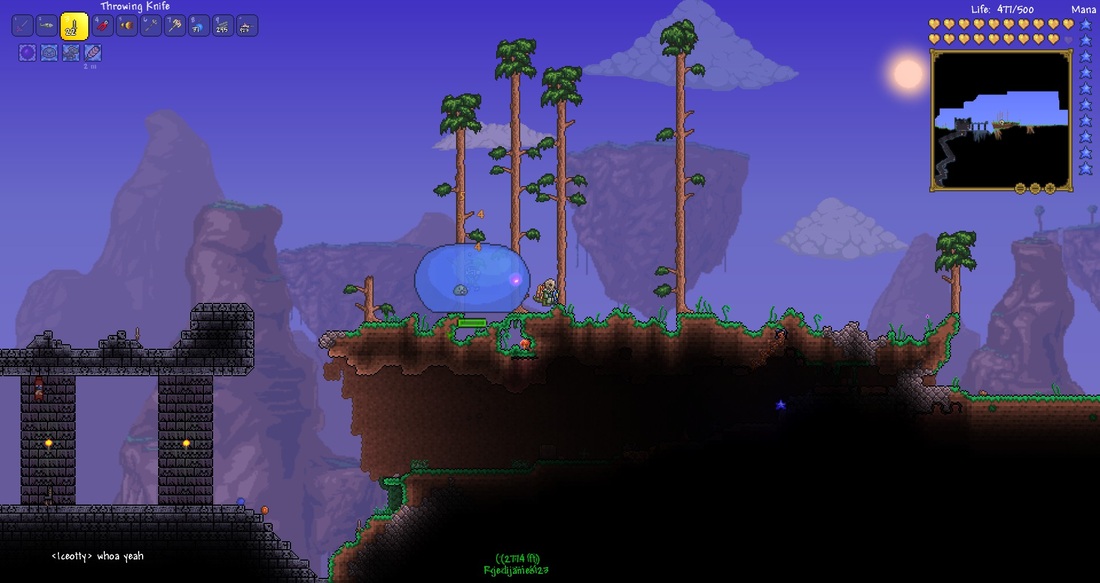